I am writing this from Ghost Ranch in New Mexico where I am in a group studying with John Phillip Newell about The Rebirthing of God, the title of his latest book. One of the key points in his message is the need to connect with who we are; we come from the earth, the earth is our mother, we are made up of earth, sky (oxygen), fire (metabolism), and water; and ancient religions – Celtic, indigenous, Hindi and others – which recognize and honor this connection, have a place at the table of rebirthing. But I was bothered by the fact that bacteria were left out of this story.  They essentially are the earth from which we are formed.

Bacteria really are the dominant life forms on the earth.  They have been around the longest; three and a half billion years, compared to few hundred thousand for modern man. While 99% of evolved life forms are now extinct, 99% of archaic bacteria are still around. All of the higher life forms depend on bacteria for life. Mitochondria, the machinery in every cell of our bodies that turns food into energy, exist because a few archaic bacteria gave up their independent lives to make a larger, more complex, and a novel life form we know as the cell. And it’s the same in the plant kingdom; the chloroplasts that harness the energy of the sun and put it into those carbohydrates come from the same kind of sacrifice. Animal cells have a nucleus which contains the mitochondria, sometimes thousands per cell, and plant cells contain the chloroplasts that convert sunlight to sugars.

Then there is our microbiome–those bacteria living on and in us that contribute to who we are. This field is relatively new, but we know already that there are many associations: obese mice lose weight when their gut bacteria are replaced by those from slim mice; fearful mice become less fearful when their gut bacteria are similarly replaced by bacteria from unafraid mice. These commensal bacteria are also a significant part of our defense against infections; they form a biofilm that is protective in itself, and many of the bacteria making up these biofilms produce substances that further protect us against specific pathogens. These defenses are strongest where we are most vulnerable – at the openings to our bodies. A well known example is the role of biofilm in the defense of the female genital tract, and the problems associated with disturbing them; this is why douching is no longer recommended. Dr Talal Nsouli, an ear, nose and throat doctor in Washington, D.C. has shown the same problem to exist when we disturb the biofilm in the nose by douching with a neti pot. The bottom line is that the health of the earth is directly related to the diversity of the bacteria in it, and we come from the earth so this is just as true for us.

So, of course, antibiotics screw up everything. Yes, we win tactical battles, but all too often they are not in our strategic interest (a phrase Gen. Moshe Yaalon of the Israeli Defense Force used to describe his country’s defense policies). Antibiotics kill off many of our commensal bacteria and handicap the defenses they provide. They pressure the bacteria in our guts to develop resistance to the antibiotic, and unlike our focus on intellectual property rights, these bacteria share their new found resistance with any bacteria interested. 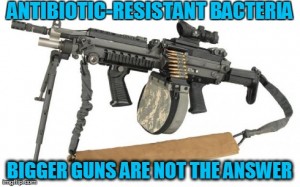 The pharmaceutical industry is trying to find bigger guns for these germs because that’s the way we fight wars, but when you realize our interconnectedness you see that we are actually fighting ourselves. As Gen. Yalon’s comment above would indicate, wars with bacteria are not unlike some of our larger wars. We may be able to learn something from our own experiences there.

For example, Dr. Kalev Sepp, a Senior Lecturer in Defense Analysis at the U.S. Naval Postgraduate School in Monterey, California, did a study looking at asymmetrical warfare, where one side, the empire, is significantly stronger than the other, the insurgents.  What he found in looking at forty eight such situations in the last century was that the empire tended to lose when they relied only on force, and they tended to win if they addressed the issues, mostly social and economic, that were behind the insurgency.

At Common Sense Medicine we see these warfare situations as depicting the survival aspect of adaptation; when bacteria are threatened they adapt to survive; when people are threatened they pull together, there is force in unity, they will form an insurgency, as we and countless others have done, in order to cope with the wrongs we identify as coming from the empire. Our point throughout in every area of concern is that we can support more healthy adaptations by creating a safe place to play while making it harder to leave the playing field. That’s what Paul Ewald shows works with bacteria and we think it’s what Sepp is getting at in coping with counterinsurgencies. Playful creative adaptations tend to lead to the greater complexity and increased diversity that are seen as the more positive pole of evolution; the one that Darwin himself characterized as coming from love.