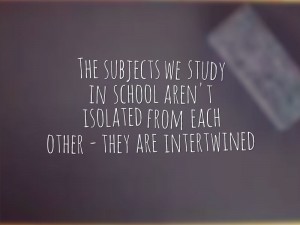 Choosing to major in Mathematics and choosing to major in Music might not be as different as we like to think. A recent article by the University of Chicago describes composers and mathematicians who use math to explore music and sound in new ways. A while ago we wrote a blog post about Einstein losing himself in music when he hit roadblocks in his work with physics (see the article here). With the perspective of the Science Daily article in mind, Einstein’s habit of turning to music is more than just taking a break to clear his head so that he could come back to his scientific work refreshed. It is actually a form of mathematical exercise, just like physics, but approached from a different angle. This is a great example of how our world doesn’t fit neatly into a box. The subjects we study in school aren’t isolated from each other – they are intertwined. And the best way to learn about the complex systems around us is to recognize and explore their complexity, just like these mathematicians and musicians are doing with music and mathematics.