Teaching to the test and the very use of tests in education is coming under increasing criticism. Conservatives see testing as an intrusion of the Federal government into State affairs, while liberals are more concerned about it emphasizing the wrong points. Both criticisms are correct, but the intrusion into state affairs began, very appropriately, with Brown v. the Board of Education, and it is still needed in many areas of the country. Indeed if the fundamental handicaps to education that are associated with poverty are to be managed in any way then states need Federal help to experiment with programs that address this, and the Federal government needs the power to promote those that work.

We have enough information now to know that testing doesn’t work for its intended purpose. It should be eliminated in its current form.

Testing began long ago, but became enshrined with Reagan’s National Commission on Excellence in Education report “A Nation at Risk.” The authors of this report looked at how poorly American students did on international tests done years earlier. Every president since then has made a priority of improving our standing on these tests and since George Bush testing has been the yardstick used to measure success. Tests are seen as the only way to measure how well our children learn. But they are not.

Diane Ravitch looks at the testing results of students in Shanghai and Hong Kong that ranked on the top of the most recent round of testing, and that we are trying to equal or exceed. Writing in The New York Review of Books for November 20th she discusses Yong Zhou’s evaluation of Chinese education in Who’s Afraid of the Big Bad Dragon?

Zhou was educated in China and is now professor in Educational Methods at the University of Oregon. He points out that China has a centuries old tradition of rote learning that helps them perform on test taking. Other oriental nations, like Japan and Korea have picked up on this tradition, and it shows in their current test scores. But he also credits this type of education with the fact that no chinese educated person has ever won a Nobel Prize. Nor did China experience an Industrial Revolution despite having the elements needed for it long before Europe. This type of learning promotes those who make good technocrats, which was helpful for oriental governments where free and innovative thinking was not particularly desirable. And that kind of society is where testing will take us if we don’t change.

In the chapter on education in our book, The Boids and the Bees, we argue similarly that children should not be treated like lab rats who have been tested and shown to learn best with reward and repetition. We and Zhou envision a system where children learn because of their intrinsic drive to explore and learn how to control their environments. It is not done by slavishly following the regimented, age based system we copied from Kaiser Wilhelm’s Germany. Nor is it done by testing.

Testing is an evaluation from outside; it is threatening, We all adapt to threats in the primitive parts of our brains–mostly by fight, flight, or freeze, and if you look you can see all of these responses in our children as some, like the oriental students, learn how to take the tests, others just drop out, and other’s cop out with drugs.

We need to see differently in order to promote creativity and innovative thinking. This kind of thinking comes, not from primitive parts of the brain stimulated by fear, but from the cortex of the brain, the part that is used when we are in a safe environment and play is fostered. It can appear disorderly and chaotic, but that is where true learning happens. 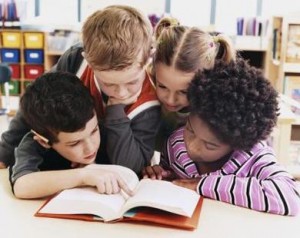