Thank you Standard and Poor’s for telling us what we already know. Now can we do anything about it? 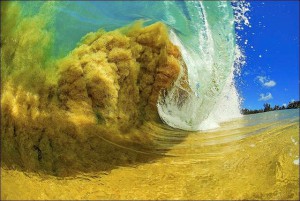 Right now many of us feel a bit  like Clark Little as he waited under this breaking wave to get just the right shot. How much of a wipe out is this going to be?

In downgrading the US credit the people at Standard and Poor’s told us that our system is broken; that the legislative road blocks thrown up by both sides when they are in opposition to the administration are not the optimal way for a government to interact with an economy. We know this. Others have said the same thing. Standard and Poor’s said it with a bite. Maybe someone will hear. Maybe we will even look to fix it instead of saying ‘I told you so’ (Republicans) or attacking the messenger (Democrats).

As we point out in The Boids and the Bees our Constitution was based on the way people thought in the 18th Century, but the models they used to think and plan with are not that different from what we use today–both are essentially analytical. They tried to instill a system of checks and balances so that one part of government could not get more powerful than another. We have refined this to the point where one side can stymie the other so nothing gets done. But the powers have also evolved to where financial interests seem to be controlling the agenda for both sides. They stayed away from popular election of the president because they were leery of the power of the people. We changed that to give the people more power and now have an overburdened system of entitlements. Over the years we have changed some and seen the system evolve into what we have today–a largely dysfunctional government that has lost most of the respect we the people have had for it.

We need a Constitutional Convention to fix our problems. If the legislature as it exists cannot resolve a debt problem without going to the brink there is no way that partisan interests will ever shoot themselves in the foot to the degree necessary to resolve the big issue of fixing government. Challenging them to fix their own system is not unreasonable; at least they know where it is broken.

At issue in the current crisis are:

But while we are fixing let’s also look at doing something with:

Central in these fixes should be the understanding that we are not dealing with a mechanical system. That’s where the founders of our nation were. That kind of thinking leads to endless analysis, reams of regulations, armies of lawyers, and trillions in expense. When we realize we are dealing with an adaptive system made up of living agents we rapidly learn that the best way of dealing with them is to increase transparency and make small changes, then wait and see how agents adapt. That understanding should be the foundation for all changes.