Epidemics and pandemics have been useful in promoting alternative medicine and our current pandemic is a case in point, but we have missed the boat. The story goes back to the cholera epidemics  of the mid 20th Century that led to the development of Oral Rehydration Therapy (ORT). This development has not been realized, used, or promoted by the alternative world. Maybe because it is recommended by both the WHO and the CDC as the first line treatment of GI problems, which takes it out of the alternative world. But it is not used in established medicine either, despite the recommendation and we agree with Josh Ruxin as to why: our system profits from illness, not from helping prevent problems with inexpensive therapies.

It’s a mixture of salt, sugar and water that triggers the sodium-glucose transport system in the upper GI tract where one molecule of sodium and two molecules of glucose actively pump 210 molecules of water into the body. It is by far the safest, most efficient, and most effective way we have of getting water into the body. In ten years of use it saved more lives that penicillin in forty, but its ingredients cannot be patented so it’s not a drug and there is no profit incentive to use it–it’s not nearly as rewarding to the system as an IV.

The CDC recommendation came two years after a Bangladeshi charity went into communities where a cholera epidemic was ongoing and told people how to mix it up (a pinch of salt, a fistful of sugar and a glass of water, or 1/4 tsp. of salt, 3 Tbs. of sugar, and a quart of water–and drink more than you lose). Thousands of live were saved. They did this for the decade of the 80s and the CDC recommendation came in 1992 when its benefits were impossible to ignore.

Can we do the same thing with our COVID-19 pandemic? We think that is very likely. Xlear is the company my wife and I started more than 20 years ago to market the xylitol containing nasal spray we developed to stop our granddaughters ear infections. Xylitol does this in two ways. First it pulls water into the nasal membranes which optimizes both the mucus in hanging on to all the pollutants, and the cilia that sweep it out. Secondly xylitol is a flexible five carbon sugar that can conform itself to fit into many of the binding sites on the viruses or bacteria that they use to hold on to our cells. If they can’t hold on they are easily washed out.

When the pandemic hit he contracted with The Institute for Antiviral Research at Utah State University to see if it did anything to SARS-CoV-2. It did, but it took many more week long studies to find which part of his spray was the part working. In June of 2020 the lab reported that the preservative they were using–Grapefruit Seed Extract–killed 99% of the virus in 15 minutes.

He reported that to the FDA and was told that there are no drugs approved for the intranasal treatment of viruses so the interested parties need to start from scratch. Since GSE is easy to make following online recipes thee are no interested parties who can profit off “drug” GSE. But there is more to it.

In August Xlear received a preprint of a study done by Amcytepharma reporting a study done on Iota carrageenan and xylitol and their effect on the pandemic virus. While the studies done by Xlear, that were reported in June, showed no effect for xylitol, the one from Amcytepharma showed xylitol effective at removing the virus. Critically the difference between the studies is that the latter one, from the Regional Biocontainment laboratory, University of Tennessee Health Science Center, Memphis, had a washing before measurement. This, if replicated, strongly suggests that the xylitol acts here just as proposed with other pathogens. The SARS-CoV-2 virus is known to dock on the sugar complexes on the ends of the sialic acids that coat our cells. This is before they find the ACE2 receptors that allow them to enter our cells and reproduce. If, as appears likely, the xylitol interrupts this docking by slipping into the receptor site then the combination of xylitol and GSE offers a one-two punch that can end our pandemic.

If you so decide use it regularly, at least four times daily, and if you are a health care worker every time you wash your hands, wash your nose. For those with the virus anecdotal reports from a Miami pulmonologist see patients return to normal within four days. 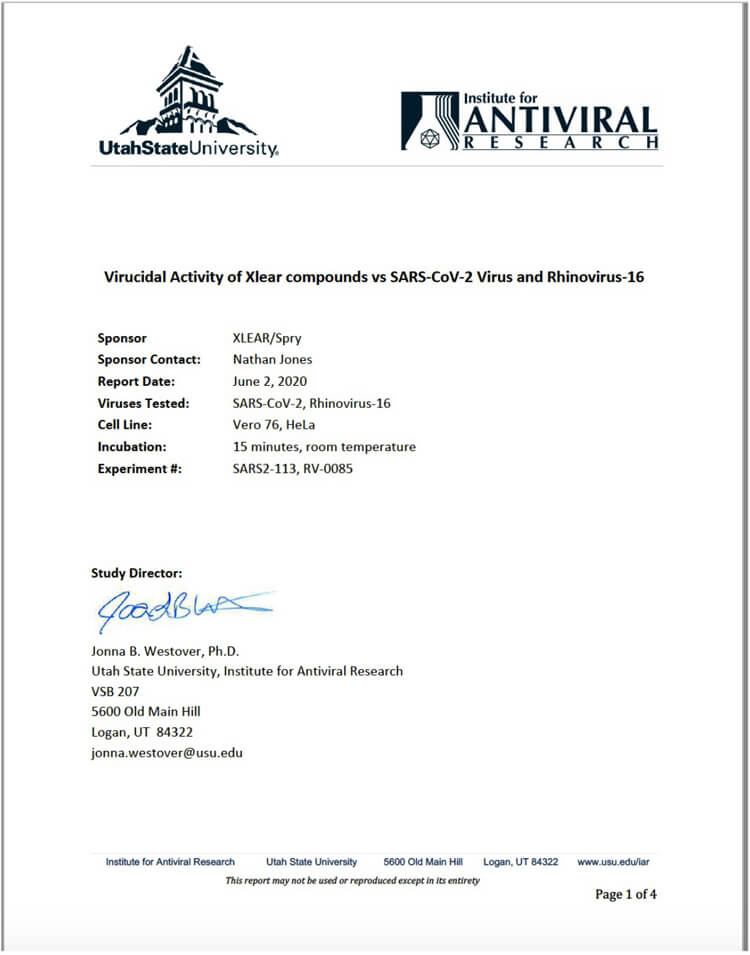