When a bunch of European bankers were checked for their willingness to cheat it was found that the best, if not the only, way to prevent their cheating was to watch them all the time. Ever since we bought into Milton Friedman’s dictum that th 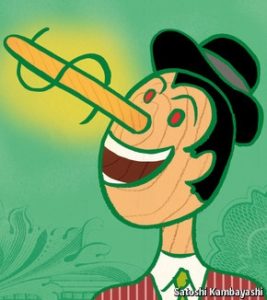 e function of the corporation is to provide a profit for the shareholders we have spread the bankers mentality and ethics into our corporate world. Customers are there to profit from and employees are turned into personnel to be managed–everyone else exists so that the fittest can survive.

As we write elsewhere this alignment on survival is one mode of evolution. The other is diversity. Darwin discussed both, but with capitalist thinking increasing in the mid nineteenth century Social Darwinism and survival of the fittest carried the day, and it still dominates in the thinking of many, like the bankers and corporate elite who see the rest as something to feed off.

And now we have a president who personifies this corporate thinking. His actions would make much more sense if we saw them in light of his survivalist orientation instead of expecting him to behave in a way we may consider more ‘political’ where all players are worthy of consideration. Like any good businessman who has bought into the Friedman doctrine he can speak to his customers in welcoming and friendly terms, but when it comes to actions he can rip them off without a second thought. Nor is this a characteristic of his party alone; capitalist self interest is pervasive, but conservative policies seem to focus there.

We consider ourselves a part of the resistance. Indeed we think it easy to see the focus on survival–and in our capitalist world that translates to profits–as the origin of evil–and we’re in pretty good company. Self interest (ego, survival, wealth) was present with Cain as he killed his brother and was the focus of all three of the temptations presented to Jesus. And Paul was pretty explicit when he wrote to Timothy that, “the love of money was the root of all evil.”

But survival is indeed a part of evolution, and it is a necessary part of progress; we would not have developed the physiological defenses we all have without the need to survive, at least until we have children. But in nature we measure the health of a system by its resilience, not by the survival of its members. We look at how easily it bounces back from a challenge; and that depends on the diversity of the members of the system and on the amount of redundancy in what they do. So if we want a healthy society and economy, and if there is any value in learning from nature, we need to shift our emphasis away from survival and toward those elements that promote resilience.

Capitalism as currently practiced eliminates both diversity and redundancy because they cost more; both are counter to the emphasis on the economies of scale and monopolies that are favored in our capitalism since they allow for more upstream profits.

This gets us back to political concepts where all members are considered equal, and  the function of government: is to make a more perfect union; establish justice; insure domestic tranquility; promote the general welfare; secure the blessings of liberty for all; as well as defend us. Except for the latter, which is largely misguided in how it sees the problem, our current administration is off the track.