Russia and the election – What to do and WHY!     A Common Sense Approach

Besides determining if Trump and his campaign were in collusion with those interfering, what to do about it to prevent a recurrence is the main problem. There are two issues: the first is the hacking that everyone looks at. Obviously we need to increase the security of our communications and avail ourselves of the technology and security procedures that are out there. It would also be helpful, in those communications, to be kinder. Hostile and scheming communications can always be used against one, so be kinder.

Secondly is the twitter bots and this is the bigger issue that few see in its proper light. In the natural world twitter is widely 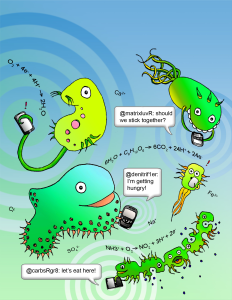 used as a way of voting, just as it is in our social world. The best example of this is the study of how rapidly and accurately twitterers voted and determined that the value of the iPhone was better than its competition. In the same way when bees need a new hive the site that is chosen is the one with the most scouts on its door step. Bacteria also use twitter techniques to register their distress and when their votes reach a certain level the actions of the whole colony shift in a process called quorum sensing.

It is pretty clear to those looking at Twitter that similar if not identical mental shifts occur in we humans when twitter messages go viral. Which brings us to the importance of the bots that were rampant in Trump’s campaign. John Bohannon, tells the story of those looking at the use of social media in the last election in the February 3 issue of the journal Science: “Whereas the pro-Trump tweeters were riddled with bots, those supporting Clinton seemed almost exclusively human.”

The twitter bots, as any geek will explain, are computer programs designed to retweet specific information–in this particular case the information was designed to hurt Clinton and help Trump. An example during the campaign was the rapidity with which Trump’s female abuse was replaced by Bill Clinton’s infidelity.

The real point of this is that twitter in nature is democratic–it’s one bug, one vote–but this democracy is destroyed by the bots. Does that matter and does it affect campaigns?

Andres Sepulveda has no doubts. He told of his work to writers for Bloomberg Businessweek. For the past ten years he has been involved using social media to swing elections in South and Central America. He tells his story openly because he is in jail in Columbia for his interference. He says he was not involved with our election, but has no doubt someone was. So who are the programmers?

Those looking at the election’s social media for the Science article, as well as our intelligence agencies are almost certain they come from Russia. The Russians have used these methods for decades in the Ukraine and Georgia, the software is the same and the comments in the programs are in Russian.

Both Mr. Sepulveda and those looking at the campaign are able to identify the bots. If they can do so why can’t the programmers at Twitter. Doing so and labelling their retweets as “This tweet likely comes from a bot” would eliminate their effect and restore some of the needed democracy to this media.