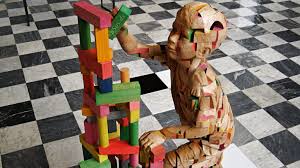 Thinking like a child means many things – it means letting go of inhibitions. It means being

spontaneous – following a random idea just to see where it takes us. It means being persistent

and open to all the new ideas that are thrown at us. And it means playing in our minds –

engaging in activities of thought for enjoyment and recreation, rather than for practical reasons.

When we play, both in body and mind, with the circumstances we are in, we open ourselves to

physics. His son, Hans, said that “[w]henever he felt that he had come to the end of the road

or into a difficult situation in his work, he would take refuge in music, and that would usually

resolve all his difficulties” (quoted in Clark, 1971, 106). Relaxing his mind into the music helped

#imagination will take you everywhere pic.twitter.com/UBbYlfPrP4

Imagination is a gift that many of us forget to use when we leave childhood. Einstein said to a

friend,”When I examine myself and my methods of thought, I come close to the conclusion that

the gift of imagination has meant more to me than any talent for absorbing absolute knowledge.”

He also said, “All great achievements of science must start from intuitive knowledge. I believe

in intuition and inspiration…At times I feel certain I am right while not knowing the reason.”

meaningful solutions can be seen on playgrounds and nurseries the world over, but is missing

in our political, economic, educational, and medical leadership. As we see the need for better

adaptation in our floundering social systems, we must allow children to remind us how to think

An important part of thinking like a child is not being afraid to fail. As we seek new ideas using

imagination and a new paradigm, we may not find the best adaptations right away. But when

many people try many different ideas, we adapt and learn as complex adaptive systems. We

can’t be afraid to think like a child – and to allow others the same flexibility. Thinking differently is

Music and the Intuitive Art of Scientific Imagination. Accessed 8/23/2014 at http://